Skip to content
HomeAlgo TradingHow Algo Trading facilitates the growth and protection of wealth in the stock market? 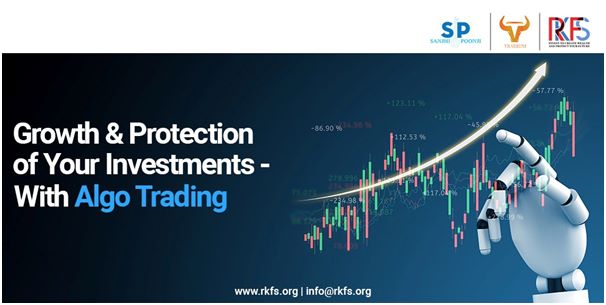 In recent years, algorithmic trading and trading robots have become more and more important and have become predominant in the stock market.

The absence of emotion or feelings often disturbs the reasoning and the decision of a human. An algo trading system “mechanically” executes the orders according to the conditions predefined in the code and therefore sticks 100% to the trading plan resulting in the protection of investors’ wealth and helping them avoid losing money.

Given the variety of methods available to invest or trade in the financial market, the possibility of delegating the task of carrying trades in the stock market to a robot is no longer futuristic.

The use of one of these options, algo trading software, has been gaining ground for many years, mainly with the emergence of algo trading platforms.

Previously restricted to large investors and financial institutions, algo trading in India now reaches individuals in a simplified way, thanks to RKFS.

The best algo trading software in India is an automatic system for conducting trading transactions without human intervention according to a given entry/exit scenario, as well as for controlling transactions and risks.

It is believed that algorithmic trading is much more efficient than classical trading. Because robots do not have emotional decisions, they are ready to work 24/7, they know exactly when to buy and when to sell, and they make transactions at a speed not available to an ordinary person.

All this ensures the protection of the investor’s wealth from unnecessary trades that he/she may carry out due to emotions.

The trend of the last few decades is the use of algorithms in financial transactions, and trading, as always, is at the forefront of enthusiasts. Speed, productivity, endurance – in all these parameters, any automatic system in trading easily surpasses a human.

The main trading volume on the exchanges has long been “made” by algorithmic systems with minimal human participation.

Some other characteristics of algo trading that contribute to the growth and protection of wealth in the stock market are:

Algorithmic trading completely eliminates the trader’s judgment about the situation on the market. It is this approach that very often helps traders get rid of emotional trades, avoid unfavorable situations, such as losing money because of aimless trading, and grow their wealth without any distraction.

If you are interested in knowing more about Algo trading, visit rkfs.org now!